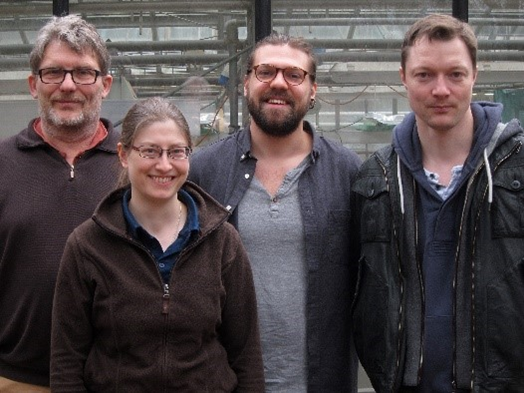 Signalling events leading form gravity and light perception to auxin induced root and stem bending towards or away from the environmental stimuli are only partly understood. Our aim is to identify and analyse novel elements which contribute to this process. Doing so we have so far identified two antagonistically acting proteins which affect light- and gravitropic bending in a calcium dependent way. Our experimental setup, which currently includes parabolic flights under Zero-G conditions, gives us the exceptional opportunity to analyse light and gravity induced signal conversion (normally linked under natural conditions) either in the absence of light or in the absence of gravity.

Sessile organisms grow towards or away from an environmental stimulus like light or gravity by an auxin mediated bending. We are interested to understand the mode of action of early signalling events either initiated by light or by gravity, which ultimately lead to a gravitropic and/or phototropic growth.

So far we have succeeded in identifying two antagonistically working proteins of the signalling chain in Arabidopsis, called EHB1 and AGD12 (Fig. 1). EHB1 stands for “enhanced bending” (Knauer et al., Plant Physiol. 2011), since an Arabidopsis loss-of-function line reacts more strongly to a given gravity or light stimulus as the wild type, while AGD12 loss-of-function mutants (Dümmer et al., J Plant Physiol. 2016) behave exact the opposite way (Fig. 2). Thus, both proteins might act as a regulating element during bending, were AGD12 is the effector and EHB1 serves as an inhibitor, respectively. Interestingly EHB1 gets redistributed after a gravitropic stimulus (90° tilt), while AGD12 is not affected (Fig. 3).  AGD12 looks quite similar to EHB1, since both proteins contain a calcium lipid binding domain (CaLB/C2), but AGD12 additionally contains an ARF-GAP domain, which functionally links the protein pair to small G proteins of the ARF family, which play an important role in vesicle sorting in the Trans-Golgi network.

Fig.1: Comparison of domain structure of EHB1 and AGD12. (A) While both proteins contain C-terminally a fully-fledged C2 or CaLB domain, AGD12 possesses an N-terminal functional active ARF-GAP domain. (B) Right hand side: Model of the Calcium binding domain within the C2 / CaLB domain of both proteins. Left hand side: ADG12 contains an additional Ca-binding element within the ARF-GAP domain, which is absent in a human homologue, providing an additional on-off element. 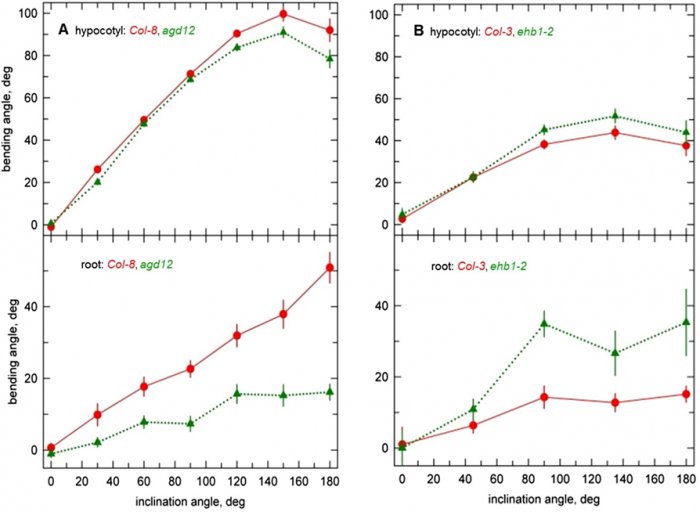 Fig. 2: The bending response obtained in stem and roots after a gravitropic stimulus (90° tilt) of wildtype (red lines) and agd12 loss-of-function mutants (green lines on the left-hand side) were compared to bending of ehb1 loss-of-function lines (green lines on the right-hand side). The results revealed an enhanced bending for ehb1 mutants, while agd12 seedling revealed lower bending angles.

Fig. 3: After a given gravitropic stimulus, EHB1, which is under vertical growth conditions equally distributed in a ring like pattern within the root tip, shifts to the upper part of the root (left side; red: high amount of EHB1, blue: low amount of EHB1). Currently we hypothesize that the asymmetrically EHB1 distribution is one important component that contributes to the shift of Ca2+-ions to the bottom of the root, which is a well-documented event during gravity induced bending.

Being part of the 36. DLR parabolic campaign in September 2019 (Fig. 5), we successfully analysed wild type Arabidopsis ehb1 loss-of-function mutants as well as EHB1 overexpressing seedlings under hyper-g and µg conditions. Seedlings were investigated by confocal laser scanning microscopy using FLUMIAS, a spinning disc microscope developed by AIRBUS for live cell imaging under zero g conditions. We took advantage of a “RootChip” supply system during flight, which was developed by Guido Grossman and coworkers in Heidelberg (Grossmann et al., Plant Cell 2011). It could be shown so far that after a given gravitropic stimulus microgravity induced a redistribution of Calcium-ions from the lower part of the plant toward the upper regions, while in EHB1 function mutants remain unaffected.